We are lucky to have a very rich biodiversity on Earth as we have a company of more than 8 million species as per latest most accurate scientific estimate; 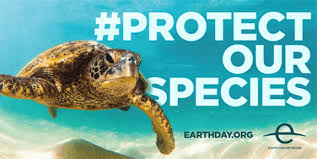 although we have only described about 1.6 million species yet. Cataloguing all may take up to 100 years. Unfortunately we are  losing these species at a faster rate than one species per day. The extinction of the dinosaurs from the Earth is the most popular phenomenon but it was a natural process human interference had nothing to do with it. We can just pray and can do nothing about such extinctions occurring in nature due to natural phenomenon but the present scenario is different where  natural rate of extinction has been geometrically accelerated by the human interference. According to WWF even by conservative estimates we are losing between 200 to 2000 species every year. The current extinction rate is estimated to be whopping 1000 to 10000 times higher than the natural extinction rate. Thus  is often referred to as the 6th extinction crisis , after the known extinction waves in geological history. Unlike mass extinction in the geological history, we the human race, are solely responsible for the current extinction challenge. Hence that there is a little debate that we are  responsible for this crisis faced by the mankind. The time has come we take concrete steps to counter the crisis. Awareness is the first step in fighting this crisis and schools can play a crucial role in this. The best schools must include the study of nature and the biodiversity in their curriculum so that they can inculcate the feeling of love and care towards the flora and fauna in the young creative minds; even if the same can’t be included in the curriculum the activity can be encouraged as extra curricular activity in schools.