India is celebrating Dussehra or Vijayadashmi 2019 with much fervor and enthusiasm as it’s one of the major festivals celebrated across India. The Navratri festival begins on the first day of the 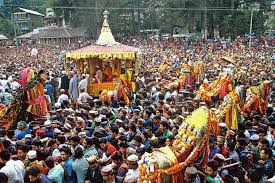 bright half of Ashvin or Aswayuja as per traditional Hindu calendar. The dates of the Sharad Navratri this year are from September 29 and ends on October 7, which would be followed with Dussehra that falls on Tuesday that is 8th October. Being the land of festivals, India celebrates the occasion indifferent ways in different parts. Best school in kullu also celebrates the Dussehra. Some states celebrate Durga’s victory over the buffalo demon Mahishasur. While Lord Rama’s triumph over Ravana the King of demons is celebrated in some states. However, victory of the good over the evil is the common purpose of celebrations all over the country. For Hindus, it is a most favorable time to observe fast, perform rituals and celebrate. Children are celebrating Dussehra with love and care. Navratri celebration and worshiping style differs from each state with the same level of devotion. In Delhi it is known as Ramlila, in West Bengal it is known as Durga Puja, in Mysore it is Dasara, in Gujarat the festival is known as Navratri. The Garba of Gujarat and Durga Puja of West Bengal are highlights of Navratri festival in India. Kullu Dussehra is the renowned festival of Kullu valley and is observed in the month of October in Himachal Pradesh. It is celebrated in the Dhalpur maidan in the Kullu valley. It begins on Vijayadashmi day and continues for seven days. In these seven days different students and people prepared a cultural program with their creative mind. The Festivals celebrate the triumph of the Lord Rama over evil. Around 200 local deities including goddess Hadimba from Manali are brought ceremoniously to the Temple of Raghunathji during this time. The celebration comes to an end when a heap of wood and grass is set to fire on the bank of the Beas River on the last day. It symbolizes the burning of Lanka, an event in the Ramayana.  Ram Lila program organized by different organization for giving quality education to people on Ramayana. The State government has accorded the status of International festival to the Kullu Dussehra which attracts more than 4-5 lakh people from different corners of the world. State government provides safe transport to public. Kullu is one of the best places to celebrate Dussehra in India and also one of the well-known tourist places near Delhi.

Today is the day when we burn all our sins,
And promise to begin all over again,
Flames come and take all the darkness away,
Light shines and makes it own way,
Because this is the festival where truth wins,

We make our way towards a bright future
And with our heads high and up chins,
Take a vow to do all this together,
As we burn the ravana inside us
Which is kept like a false heather!
Happy dusherra