Mahatma Gandhi’s life inspires me to be a good human being .The life of Mahatma Gandhi has been an inspiration not only for Indians but for people from all of the countries  as well .He was an 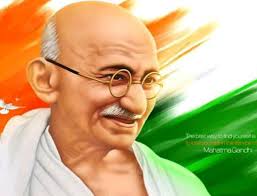 epitome of many virtues selfless actions and peace spreading thoughts.  No wonder he is called Mahatma the great soul by the entire world , people are born people die but some people after they are gone leave behind them a trail of light that illuminates the path for the striving followers . Mahatma Gandhi was a great soul whose philosophy and ideology influenced the world considerably .He practised nonviolence and tried to resist all opposition spiritually .He believed in overcoming  fear dependence on others through self assistance and self industry .He successfully resisted the British in justice aggression ,operation using his nonviolence and Satyagraha .Ultimately succeeded in winning independence from Britishers .His philosophy and ideology were adopted by many great leaders of the world . Tolstoy Martin ,Luther King ,Nelson Mandela etc successfully adopted and practised his teachings .The world acknowledges his contributions to mankind in modern times . Mahatma Gandhi‘s ideology is universal ,which is relevant for all times .People know very little about his subtills powerful and pragmatic ideology .If his ideologies are not effective the world would  not have been accorded him the title of Mahatma .His ideology is admired throughout the world for its universal and spiritual appeal .Its relevance in the contemporary turbulent times is more than it was in the past .If Mahatma Gandhi‘s most famous ideology of nonviolence is practised by each individual ,state and country in the world conflicts wars violence et cetera will be wiped from the Face of the world .People we live in a secure and happier world .

Similarly Gandhi’s ideology on vegetarianism ,truth full Ness ,Self government ,self-reliance ,deserving silence cleanliness etc .Whole solutions to almost all the problems affecting people in the modern times, if put into practice they have the power to enable the modern man enjoy life holistically .There is inspiration and everything he did I really want to live a great life that he had lived.