NAXALISM -- A THREAT TO INDIA’S UNITY

The term 'Naxalite' is derived from Naxalbari which is the name of the West-Bengal town from where India's Maoist movement began. It was a revolutionary 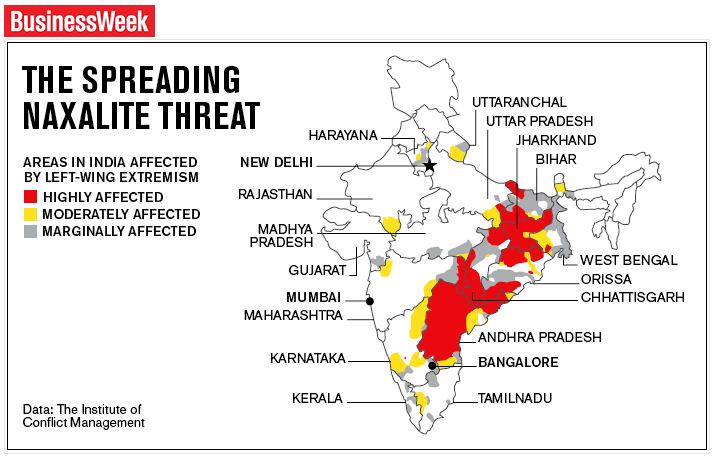 movement of the peasants and the labour class. This movement was backed by the Communist Party of India (Marxist and Leninist) and CharuMazumdar had led the first uprising of Naxalite s Initially, it was a mass movement of the peasants. Later, the peasantS  were taught new military strategies and guerrilla welfare. The peasants were trained for armed struggle against the rich and influential land owners.In initial years, Naxalites were active in West Bengal. This movement got strengthened with the aid from China and spread in the regions of Chhattisgarh, Odisha, Jharkhand, Andhra Pradesh, Kerala, Bihar and Madhya Pradesh. The area of India where support for the Naxalism runs highest has been called the red corridor. The States of Chhattisgarh, Jharkhand, Odisha, Bihar, West Bengal, Andhra Pradesh, Telangana, Maharashtra, Madhya Pradesh and Uttar Pradesh are considered affected, although in varying degrees.The movement was a result of the exploitation and ill-treatment of the peasants by the landlords and tea-garden owners. These peasants were treated like bonded labours by the rich and were living a pathetic life. The backward population wanted their share of land which was denied to them for years. Landless farmers and peasants felt cheated for being denied lands. Naxalite groups had capitalised on this resentment.They have however achieved technological superiority over the years and have been found using AK-47s, pushing the government forces also to upgrade their weapons. The Peoples Liberation Guerilla Army (PLGA), the armed wing of CPI (Maoist), has been created with this purpose in mind In the first stage of the insurgency, the PLGA resorts to guenilla warfare, this primarily aims at creating a vacuum at the grass-roots level of the existing governance structures.This is achieved by killing lower-level government officials, police-personnel of the local police stations, the workers of mainstream political parties and the people's representatives of the Panchayati Raj system. After creating a political and governance vacuum, they coerce the local population to join the movement.TheMaoists seek to control the countrysideby  creating fears in the minds of the people and for this purpose they kill and abduct people.In the meanwhile, many Front Organisations are created to facilitate mass-mobilisation in semi-urban and urban areas by using democratic means. Most of the Front Organisations are led by well-educated intellectuals with firm belief in the Maoist insurgency doctrine.These ideologies function as masks to cover the violent nature of the CPI (Maoist) ideology. They also form propaganda machinery of the party.The Front Organisations also skilfully use state structures and legal processes to further the Maoist agenda and weaken the enforcement regime. The important functions of these organisations include recruitment of 'professional revolutionaries', ra1smg funds for the insurgency, creating urban shelters for underground cadres, providing legal assistance to arrested cadres and mass- mobilisation by agitating over issues of convenience.The Front Organisations aim to provide short-term democratic cover-up to the oppressive nature of the Maoist ideology. The CPI (Maoist) also has a strategic game-plan to create a 'United Front' with all like-minded insurgent outfits in India The Naxalite movement highlights the internal weaknesses of the country. It hampers the economic development of the country, as the resources that must be used for the development of the country are diverted towards the management and control of naxalites and their activities. The conflicts between the armed forces and naxalites are the biggest threats to the common man.The government's approach is to deal with Naxalism in a holistic manner, in the areas of security, development, ensuring rights and entitlements of local communities, improvement in governance and public perception management. The Police and Public Order fall under the jurisdiction of States, action on maintenance of law and order lies primarily in the domain of the State Governments.The Centre aims at enhancing the capacity of the State Governments to tackle the Maoist menace in a concerted manner. The Central Government closely monitors the situation and supplements and coordinates their efforts in several ways. Undoubted1y, Naxalism is a serious security threat to the nation. It becomes imperative for the government to increase the connectivity to the affected areas. This Wii be beneficial in creating strong ties and links between the outer world and the affected areas. The police force is still not capable of providing security. The government needs to provide better training and arming to the police forces.The civilians and media can play an important role in making the Naxalites realise that India is a democratic country and it offers legitimate forums for grievance redressal. An ideology based on violence and annihilation hampers the progress of the civil society. It is through a holistic approach focussing on development and security related interventions, the problem can be successfully tackled.